Over the years, as I popped in and out of various gun stores in various states, I often stayed away from “that” section of the gun counter. You know, the one with the sub $200 pistols with names hardly published in the latest Guns and Ammo magazine. The tiny .25 ACP has always been a cartridge that intrigued me for some odd reason. The thought that in days gone by, this diminutive caliber had not only been relied upon for carry, but sought after boggled my mind, and still does. While well aware of the meme-like quality and reputation of the little Jennings in particular, I often told myself I’d only purchase one if I could find it for under $100. Years went by, and I forgot about the Jennings.

One day a few weeks ago, I was in my local gun shop purchasing some more reloading components, and I browsed “that” section of the counter, waiting for my friend and owner of the shop to finish helping another customer. I saw my forgotten J 25, with box and spare magazine, for $75. I told Jim, the owner of the shop I wanted to purchase the gun. After a series of looks that could only be interpreted as concern for my mental well-being, he retrieved the box for the gun and rang me up for it, as well as a couple of boxes of full metal jacket .25 ACP. Giddy with excitement, I hopped in my truck and drove home. I decided to shoot the pistol as it sat in the box. Needless to say, after years of sitting neglected, it did not do so well. A video of that initial range session can be found below.

Despite the pistol’s initial failings, I was not going to give up that easily. It might have been stubborn pride, or boredom from the COVID-19 quarantine, but I made the J25 my primary mission. I completely disassembled the gun and began giving it a thorough cleaning. The tiny six round magazines were not readily able to be disassembled, so I took some CLP and a QTip and chased the magazine follower down, cleaning the insides of the magazines. After making sure the pistol was well lubricated and cleaned, I reassembled it and could immediately tell a difference in how smoothly the slide moved on the frame. 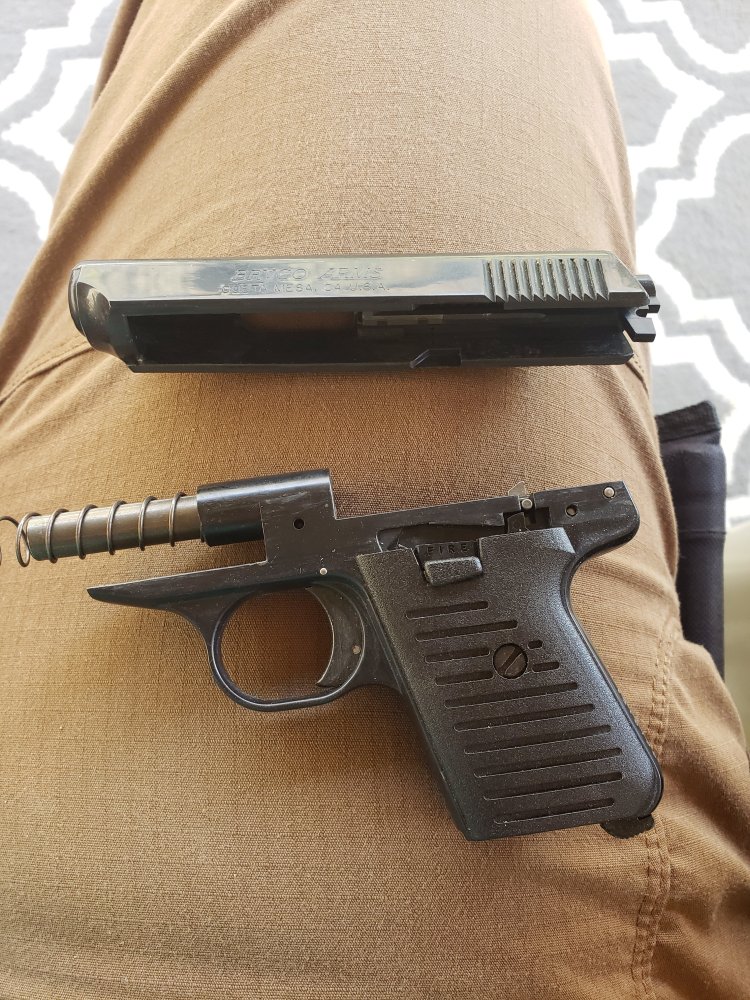 Taking it out for a second shooting session, I was blown away. The J25 acted like a completely different gun. It ran well, and was even fun to shoot, as long as I kept my mind off of the price of ammunition. We’ll discuss that more later. Here are videos of my second and third trips to the range, respectively.

So, as you may have noticed in the third video, accuracy is surprisingly decent at self defense distances for such a small gun. With decent reliability thus far, and acceptable accuracy, my thoughts began shifting to whether or not this gun is suitable for defensive use. The short answer, in my opinion, is no. If you have the means and ability to procure a firearm in at least .380 ACP, and carry it, I would strongly advise that course of action. The .25 ACP leaves a great deal to be desired in muzzle energy, projectile performance, cost of ammunition, and being able to shoot the gun accurately AND quickly. That being said, the conversations centered around defensive handgun selection are rarely black and white, and it’s truly rare to always be able to carry the same gun. Sometimes, the need for something very discreet arises. And it is in that role, and that role only, that I consider the .25 ACP to be an acceptable choice.

The reality is that the .25 ACP and more specifically, the Jennings J25, are not recommendations I would make for a go-to concealed carry piece. They are, at best, a last ditch option for when you need a backup, or you simply cannot get away with carrying anything else. The ammunition is expensive- I paid $20 for a 50 round box of range ammunition. The hollow point offerings from Speer and Hornady are more. Interestingly enough, many proponents of the .25 claim that the velocity is simply not there for reliable expansion AND penetration, and of the two, penetration is the more important factor. Based on this, they claim that the .25 ACP is best carried with FMJ rounds.

While it’s usefulness for defense may be the subject of debate for some time to come, I can say that this little pistol is a lot of fun, and for the price, maybe you can have some fun too, if you find one for sale at your local gun shop.

Thank you for reading. If you haven’t already, consider subscribing to my YouTube channel. That is where I produce the bulk of my content these days.

Nick is an avid shooter and 2nd Amendment content creator with 20 years shooting experience. You can usually find him testing guns and equipment at his range on his property, or creating video content to help others enjoy the shooting sports as much as he has over the years. View more posts